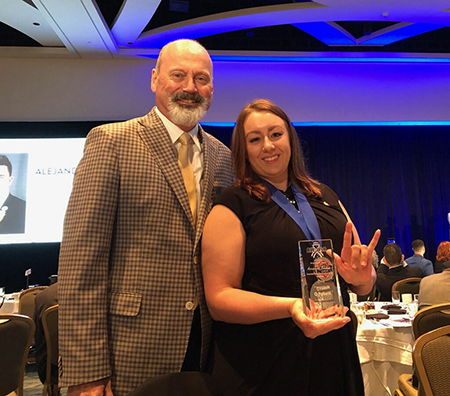 Forbes is one of 20 students to be named to the All-USA Academic Team and will receive a $5,000 scholarship. The All-USA program is widely recognized as the most prestigious academic honor for students attending associate degree-granting institutions. All-USA Academic Team members were selected for their outstanding intellectual achievement, leadership, and community and campus engagement.

“We congratulate Forbes for receiving these prestigious and highly competitive scholarships that recognize outstanding achievements both inside and outside the classroom,” said Phi Theta Kappa’s President and CEO Dr. Lynn Tincher-Ladner. “Scholarship programs like these not only recognize student achievement, but also create meaningful pathways for college students to succeed by putting completion within financial reach.”

“This is the second year in a row that Cleveland State has had a student receive the top All-Academic Team score in the state of Tennessee,” stated PTK Adviser Karen Dale. “Amanda has served as the president for Phi Theta Kappa this year, and was instrumental in organizing a successful voter registration event, as well as serving as a mentor to Tennessee Valley Early College Students and turning her passion for special needs/hearing impaired into a successful Honors in Action Project.”

“I was so shocked when Dr. Seymour called to tell me,” stated Forbes. I don’t know what to say, other than I am so thrilled! This scholarship helps me continue my education and for that, I’m so grateful.”

Phi Theta Kappa is the premier honor society recognizing the academic achievement of students at associate degree-granting colleges and helping them to grow as scholars and leaders. The Society is made up of more than 3.5 million members and nearly 1,300 chapters in 10 nations. Learn more at ptk.org.